Posted on January 31, 2014 by Sonia Quinones in Customer Spotlight | 30 comments

This post is part of our Customer Spotlight series. If you have an interesting story to tell and would like to share your experience with WordPress and Elegant Themes on our blog, please contact us!

The Writing Muse Comes to Brooklyn

While there were many wonderful things about my childhood, the view outside my second-story bedroom window was not one of them: an entire city block of four-story red brick buildings with not an inch of space between them.

It was Brooklyn, before it became cool.

So I did what any sensible bookish girl would do: I escaped into stories. I read every book my family owned, began a lifelong affair with the library system, and when I met equally bookish Laura Tripoli just a few short years later in junior high, I began writing my own stories for others to read. Thanks to her, at 14 I discovered that stories are not just a way to escape life; they are also a way to create a community that makes life worth living.

There were five of us: Laura, Carrie, Dionne, Grace and me. All writing what would eventually be known as Star Wars fanzine fiction. While the heroes in George Lucas’s version had mad impressive skills, in our version Luke and Han came to our junior high school to ask for our help to save the galaxy from the Evil Empire. (I liked our version better.)

We wrote at night and on weekends, sharing our handwritten pages across the lunch table. At first our story lines were tightly interwoven, but eventually we veered off into our own adventures. I left Star Wars behind and moved on to Raiders of the Lost Ark, then James Bond, then TV shows, and eventually to original worlds of my own creation.

Over the years I lost track of my childhood friends, but I still have the stories. They’ve traveled with me from apartment to apartment and across state lines.

Branching Out On My Own

After spending far too many years in a support role (aka “the secretary”), I eventually began to get hired for my writing skills. Except this time not for my skill in creating intergalactic adventures, but for my ability to break down complicated goobley-gook (such as health care or government regulations) so that ordinary people can understand their options and make informed decisions.

It’s not as exciting as writing a light saber fight, but it is rewarding work that makes a difference in people’s lives.

Eventually I realized that the best way to do more of what I like to do—aka help people understand their options/make great decisions/feel supported—was to go off on my own and offer my writing services to a variety of clients as a freelance writer.

When I decided to start freelancing I knew that I wanted to have complete control over what my website would say and look like. But I also knew that I didn’t have much money to get what I wanted done.

I learned about WordPress and was impressed by the tremendous community that has emerged around it. Elegant Themes was one of the first theme providers I discovered and while I experimented with others I came back to ET for a couple of reasons.

The first was that I was impressed by the active and engaged backend support available to its members. It was through Elegant Themes that I finally learned how to use CSS to customize my site and to not be afraid to tinker because even if I break my site (which I have done more than once), there is always a way to fix it.

The second and most important reason I came back to the ET community was the release of Divi, a framework that finally allowed me to create a site that matched the vision I had in my head. One that was very aware of design aesthetics and very different from most other writers’ websites. 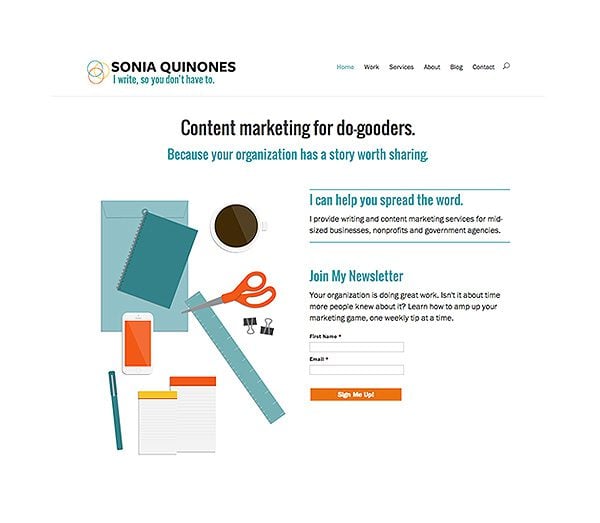 What’s Next On My Radar

My top priority right now is to continue to grow my business. I also intend to carve out more time to write fiction again, a first love I have never forgotten. I can wax poetic about writing, but it comes down to this:

Explore Divi, The Most Popular WordPress Theme In The World And The Ultimate Page Builder

Check Out These Related Posts

How Divi Is Fueling Entrepreneurship in Portugal

Posted on August 14, 2018 by Nathan B. Weller in Customer Spotlight

This post was submitted by Kevin Mullins as part of our community themed Divi Summer Sale week. Each day of the weeklong sale we will be publishing new stories submitted by community members about how Divi has helped them build their careers and businesses. “Work is a major instrument of God’s...

Posted on August 13, 2018 by Nathan B. Weller in Customer Spotlight

Posted on August 12, 2018 by Nathan B. Weller in Customer Spotlight

This post was submitted by Katie Fenton as part of our community themed Divi Summer Sale week. Each day of the weeklong sale we will be publishing new stories submitted by community members about how Divi has helped them build their careers and businesses. twofentons (the clue is in the name) is...

767,154 Customers Are Already Building Amazing Websites With Divi. Join The Most Empowered WordPress Community On The Web

We offer a 30 Day Money Back Guarantee, so joining is Risk-Free!