Earlier this week we introduced Divi 2.4, the biggest upgrade in Divi history and a giant leap forward for our most popular WordPress theme. There are so many great features to explore in this update that it was hard to describe them all on the release post, which is why we have decided to do a 2-week series of informational blog posts that will aim to teach you how to take full advantage of Divi 2.4 and its new options. In part five of this series, we will exploring the new Divi Code Module and how it can be used to integrate third party plugins into the Divi Builder.

Learn All About Divi 2.4 Here

In Divi 2.4, it is easier than ever to integrate third party plugins directly into the Divi Builder. This is thanks to the new Code Module and Fullwidth Code Module. When in the past, text modules could be used to add shortcodes to the page, the module came with extra bells and whistles that were superfluous for code integration. More importantly, no method for adding shortcodes to Fullwidth Sections existed. Both of these issues have been solved in 2.4, and it’s amazing what a simple module can allow you to do.

The power of Divi comes not only from the wide array of native modules it includes, but more importantly from the builder’s intuitive layout tools. Your ability to create diverse layouts using Divi’s wide range of column structure and row options is what makes the builder so versatile.

When you consider the fact that these complex layouts can be combined with third party plugins, so many more possibilities open up. Divi comes with so much to work with, but there is no reason you can’t branch out as well.

Divi now comes with both a Code Module and a Fullwidth Code module, which means you can add code and third party shortcodes into an section type. Whenever you add a new module to a column or a Fullwidth Section, look for the new Code Module in your list of available modules.

Using the code modules is incredibly easy. It’s really just a place to plop in your shortcodes, and there is only a single text field inside the module settings (aside from the Admin Label, CSS ID and CSS Class options that come with all modules). 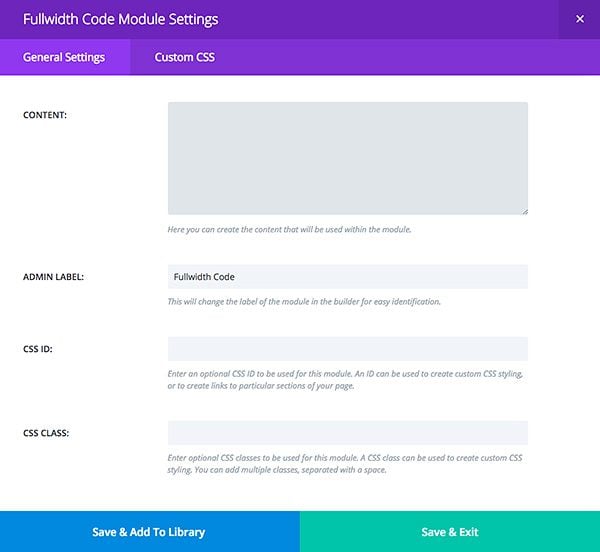 If you ever want to add a shortcode to your page, simple paste it into the Code Module’s text field and save.

There are limitless ways that the code modules can be used, since there are so many amazing WordPress plugins out there! Just to give you an idea how integrating third party plugins can be used to expand your Divi sites, I have outlined some example integrations below.

Using the Fullwidth Code module, you can seamlessly integrate Slider Revolution (and other popular third party slider plugins). If the Divi Slider Module is not robust enough for you, feel free to try something else. Combining Divi with other great plugins is certainly a way to take full advantage of the builder.

In this example, I have used the Slider Revolution plugin to create a new slider. This is the slider I would like to use in place of the standard Fullwidth Divi Slider. 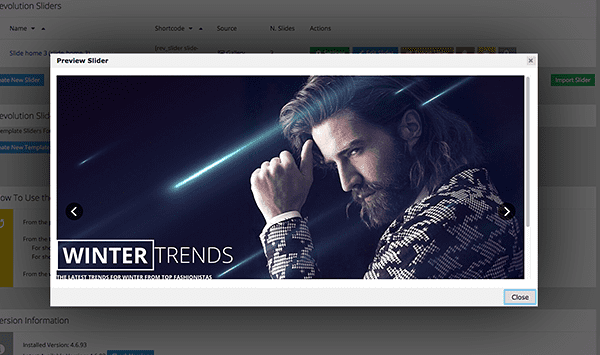 Whenever you create a new slider with Slider Revolution, as with most slider plugins, a shortcode is generated that can be used to add your slider to any post or page on your site. 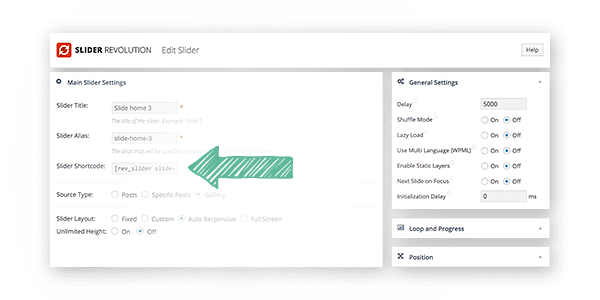 This is where Divi’s new Fullwidth Code Module comes into play. Using this module in combination with the slider’s shortcode, you can create a custom slider and enjoy all of the versatility and freedoms you have become accustomed to with Divi.

The Divi’s code module is pretty simple (that’s the point), just paste in your code into the text field and click save. That’s it! 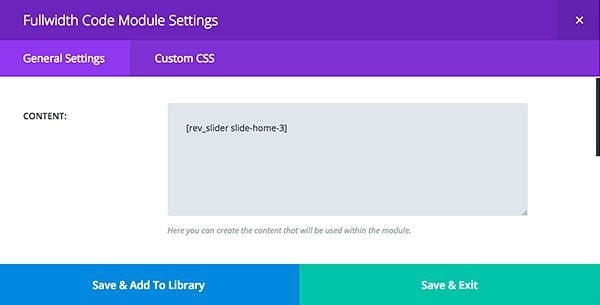 Since we are using a Fullwidth Code module inside of a Fullwidth Section, this new slider extends the full width of the page and fits perfectly into your Divi layout. It’s hard to tell that the slider has been generated by a third party plugin at all, since it has been placed within the Divi Builder.

Essential Grid is another popular commecial plugin that offers an alternative to the native Divi Gallery and Portfolio modules. If you are looking to achieve a style that our modules do not currently support, branching out to third party gallery plugins is worth a try! Thanks to the Code Module, adding Essential Grid to standard of Fullwidth Sections is simple.

First things first, I created my new gallery using the Essential Grid plugin. As with most gallery plugins, I am given a shortcode that can be used to display this gallery anywhere on my site. By copying and pasting this shortcode into the builder, we can add the new grid into our Divi-builder page. 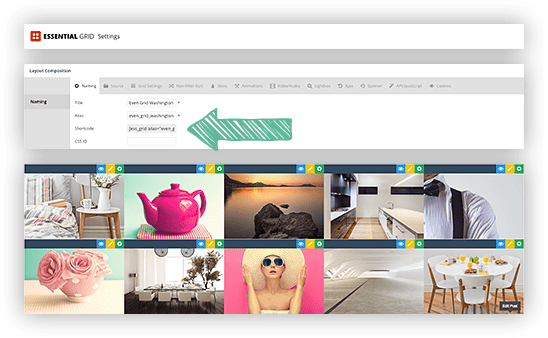 Whenever you are adding a new shortcode to your page, the Code Module is the best way to do it. In this case I want my gallery to extend the full width of the browser (much like Divi’s native Fullwidth Portfolio module). Since I want it to be full width, I have added a new Fullwidth Section along with a Fullwidth Code Module. Inside the content field of the Fullwidth Module, I have pasted in the Essential Grid shortcode I copied earlier. 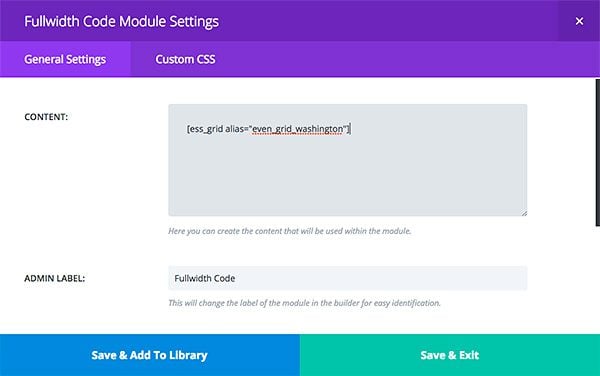 After updating the page, you can see that my new third-party gallery has been added to the page. It looks great in our fullwidth row since I used the Code Module and a FullWidth section, each of which contain no added styling or spacing. The result is a fluid grid that fits perfectly into the layout.

Using the code module is also a great way to integrate our very own Bloom plugin into Divi. Bloom has various integration methods. Some options will automatically add a popup or opt-in form to your page, which makes it easy to get started building your email list. However, Bloom also offers shortcode integration, giving you more control over exactly where the opt-in form appears. Instead of adding the form automatically to the top or bottom of your pages, the shortcode can be used to add the op-in form inside the builder. Using the shortcode in combination with Divi’s Code Module, you can be more strategic about where you opt-in forms appear. You might find you get more conversions when the opt-in form is placed at certain points throughout your page.

After creating my Inline Opt-In form, I copy and paste the shortcode as we have done previously. This shortcode can now be placed inside the Divi Code Module.

This time I will be using the standard code module inside of a Specialty Section, instead of using the Fullwidth Code Module we used for the Slider Revolution and Essential Grid integration.

By placing this new section below the slider on my homepage, I can be confident that users will see the opt-in form right away. It also gives me the opportunity to support the opt-in form with some informational blurbs to the left. Using this technique, you can place individual opt-in forms anywhere on your site, tailoring those forms to the page content and you visitor’s interests. 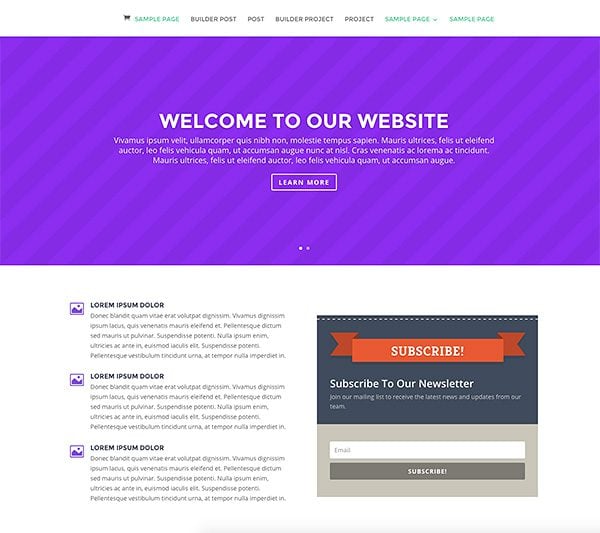 Making It Easier To Branch Out

We like to think of Divi as a great all-in-one solution, but that doesn’t mean you can’t use third party plugins every once in a while! In fact, it’s the WordPress community and the thousands of free and commercial plugins available to it that make WordPress so great. The examples above are just a few possibilities out of thousands, so feel free to experiment!

I am the founder and CEO here at Elegant Themes. When I'm not hard at work on new themes, I enjoy writing an article or two on our blog!

Explore Divi, The Most Popular WordPress Theme In The World And The Ultimate Page Builder

Check Out These Related Posts

There are lots of nonprofit organizations across the globe. Just about every one of them needs a well-designed website to tell their story and receive donations to help their causes. Divi is an excellent theme for nonprofits such as charities. Fortunately, you don’t have to start from scratch for...

12 Best Professional Development Books for Pros at All Career Stages

These days, we all have access to a near infinite amount of resources we can use for our professional development. That includes online tutorials, podcasts, and more. However, books are still our favorite medium for in-depth learning. In this article, we’re going to introduce you to 12 of our...

Inspiration comes in many forms and professional development never ends. With that in mind, we have put together a massive list of web design blogs that can keep your brain fed for the entire year. But don’t worry. You won’t find any duds on this list. We respect your time and feel like...

767,154 Customers Are Already Building Amazing Websites With Divi. Join The Most Empowered WordPress Community On The Web

We offer a 30 Day Money Back Guarantee, so joining is Risk-Free!